Don’t you just love Friday’s?  The first part of the day usually isn’t that wonderful (with all the normal boring weekday items to take care of and such), but once that part is all said and done Friday’s are fun days! Or, depending on your schedule, fun evenings! Whatever the case – it’s the start to the weekend, which for me usually means I get to sleep in a bit more, and my time is my own to do with what I please (family and animals allowing, of course).

This weekend I’ve learned that I get to focus a bit more than usual on Second Life (SL), and this is a good thing!  Thanks to my wonderful better half who heard my cries of blogging frustration, I have now acquired my own domain and we have moved off of WordPress.com which will allow me much more freedom and control than I had previously.  Don’t get me wrong, I love WordPress.com, highly recommend it  over any other blogging sites I’ve seen because of the flexibility they offer, and obviously they have some wonderful tools that I’m still able to use on my own domain; but for my own specific needs it was a bit limiting.  Now if I can just get this one set up the way I want it…

Which leads me to the next bit…this post is not your normal SL store shopping post, and it shouldn’t be!  I want to set this in a separate area, News and Views maybe (well, not that name, but you get the idea), a general post / discussion area.  Comments welcome, spammers heads chopped off…that sort of thing.  I’ve always loved being able to interact people through SL but running a business all by yourself tends to make you a bit of a recluse and I must admit I don’t get out much anymore sadly…except for the occasional shopping spree…I am a female after all!

That being said, I’ll just nip this little comment from “KoolGuy92453” in the bud (name changed to protect the not-so-innocent as this one’s profile would lead you to believe), who sent me an instant message this past week while I was online working.  Now, if you’re a resident of SL and you’ve been a resident longer than a week, you’ve met someone like this guy before (or maybe a female version).  Some of us longer residents get a kick out of toying with these types, but I personally, get a kick out of being honest because they think I’m toying with them (ha)!

Besides asking a store related question to break the ice, he dug a bit deeper and asked me which one of the pictures in my profile was me.  Well, none of them actually, are my avatar in SL.  So he asked if any of the store models were me.  Well, yes, some of them are…but most of them are not.  Not giving up, he asked what I look like most of the time, and I could only reply that my avatar changes looks quite drastically so it would be hard for me to say, exactly.

After a long pause he asked me if I would mind popping down to the store to meet him.  Well, I wasn’t really dressed for making a public appearance as I explained to him just before I sent him the following picture, and I’m quite sure he was expecting to see something a little more…risque… 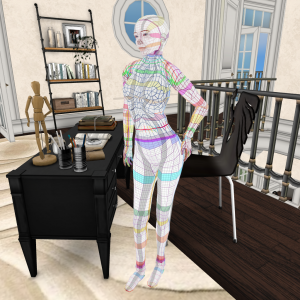 I never heard another peep from him after that.  Broke my heart, it really did.  Ah well, there’s always next time!

So feel free to communicate with me and I’ll use your thoughts, rants, etc., in the next fun crap post!  Maybe you have an idea of a better tab name for this area than “fun crap”…let me know!  I love feedback, I really do, it lets me know I’m still alive.  🙂 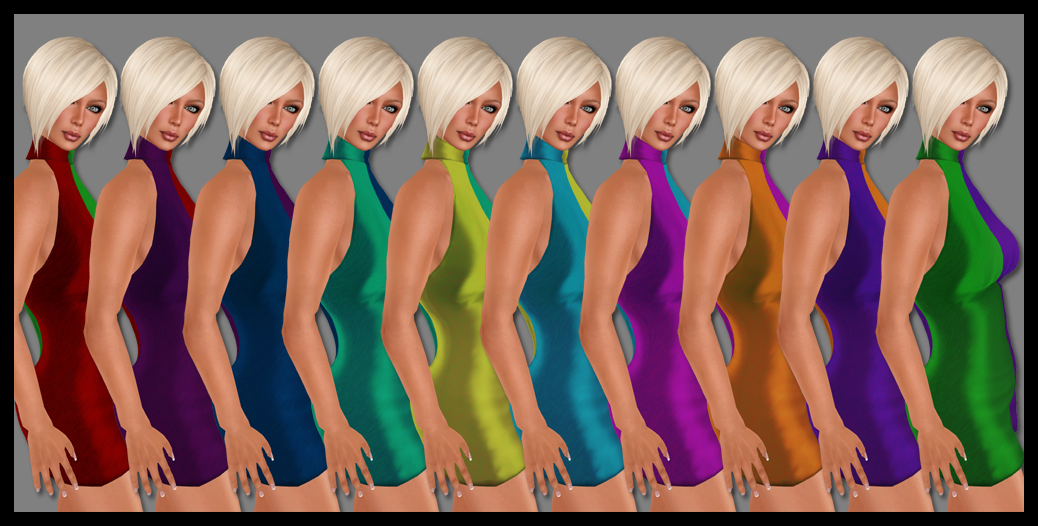 New for Enticing Designs 2015 Spring/Summer collection are these alluring color block halter neck mini dresses!  Just popping with energizing colors and available in 10 combinations, they are made in rigged Mesh and come in 6 sizes (XXS through XL) to help you acquire the best fit for your size and shape.  Currently they can only be found in the dress section of the flagship store, so drop by and try a demo today!